Construction of our new congregation – UPDATE

It’s been quite a hectic season of Jewish festivals, projects, outreach events and so much more. The work of the Lord never ceases and it’s exciting!

We’ve also been very much submerged in the reconstruction and renovation of our new building for our congregation. Some amazing progress has been made and since you’ve been a part of it since the very beginning, either through prayers, encouragement, or generous giving, we are grateful for it and want to share it wth you, so you can get a glimpse at how it all is taking shape.

It’s been quite a challenging season to say the least. Anyone who has ever taken on himself the task of building, knows all about those challenges. But if you’ve ever tried building in Israel, you know there’s a whole set of challenges that come with that territory. The obstacles kept piling up, resistance and attacks kept coming. Our ministry’s presence in the city definitely cannot be ignored and the religious orthodox authorities have made it clear they would not stop fighting us. Which makes us realize the importance of our presence and work in our area.

It’s obvious how fiercely the enemy objects us building the house of the Lord in Ashdod, which makes us even more determined to build it for the glory of God!

It has been much like in Nehemiah 4:16-19, when they were building the city walls and had to hold the building materials in one hand, while holding weapons in the other to defend against attacks. That’s what it has been like, trying to build and advance the kingdom of God, while fighting off attacks of the enemy.

We’re thankful for the professionals God sent our way: the architects, lawyers and contractors, who haven’t allowed the construction work to stop, not even for a day, They’ve been fighting alongside us despite the mounting pressure.

You’ve been faithfully praying and standing with us throughout the process and I wanted to update you, as well as ask for your prayers for provision for the two immediate needs we have while we’re trying to complete the renovations. If you feel you would like to contribute in any way to the completion of this building, that would also be a tremendous blessing.

First is a need in building a water reservoir as a requirement of our city authorities.

We have underground spaces (rooms) that are already built, but now due to this issue need to be restructured with hydro-isolation so we can put in a water pumping system connected to the water reservoir, to be used in cases of emergency.

We understand it’s not a minor issue that can be resolved later on, since it has to do with safety, especially for us who live under constant rocket threat form Gaza. The threat is so real and imminent, that we actually built our lobby as a bomb shelter, so people are protected inside if there are sirens and we need to find shelter.
We’ve learned from past incidents, when the rocket siren caught us right in the middle of our weekly service and we had less than a minute to evacuate everybody. It was nearly impossible and quite dangerous. So it was our responsibility to make sure we build a safe solution for future occurrences, when wars break out. That is our reality in Israel and we’ve learned to live with it. God has given us wisdom how to move in situations like these.

The water reservoir is something the authorities are very strict with, and will not let us move in, unless we provide that reservoir system, so they can issue a clearance and an occupant permit for us to go ahead and move into the new congregation building.

The cost of building this water reservoir system is $50,000.

Another immediate need is due to the persecutions we have endured for years, where the building we rent for our congregation was often targeted and there was no way of proving anything to the authorities without security cameras.
So it’s one of the very important things we will need now to instal, security cameras, which will also cost around $15,000.

It’s quite a challenging task building the house of God in Israel. We trust that through your prayers and God’s infinite grace, we will push through until we’re on “the other side”. 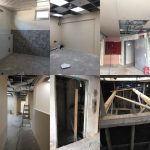