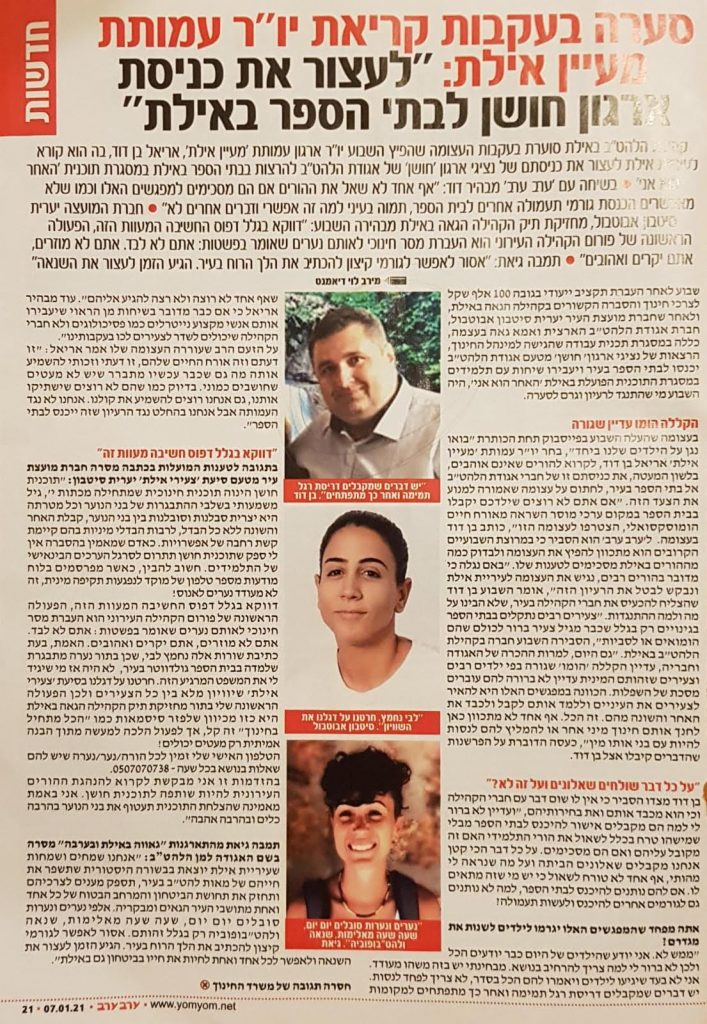 Recently our daughter congregation in Eilat was faced with the reality that the LGBT community was granted free pass by the Eilat municipality to propagate their lifestyle in local schools to underage kids.

Aside from the obvious issues they have with that lifestyle, Ariel Ben-David, Mayan Eilat’s pastor claims the move is illegal, because no other movement or religious representation is granted the same kind of freedom and access to underage students, aside from the fact that parents were never consulted, nor have they given their consent to something they might strongly disagree with, and is not a part of school curriculum.

As Bible believing followers of Yeshua, we are obviously against that, but when these agendas are being hidden from our sight and presented to our underage children without our consent, it becomes a deeper issue.

Pastor Ariel actively denounced such agenda, and obviously was also faced with backlash calling his actions “hateful”, when in actual fact he was bold enough to stand up on behalf of dozens of other parents who were outraged at such blatant disregard for the parents right to chose what their child is exposed to, at home or at school.

In the same way by law, pastor Ariel wouldn’t be allowed to come to schools and openly share his faith to underage kids, he feels the law must be applied equally.

We as believers are called to love all and be a light to the world, but we also have to set moral boundaries, especially when it comes to protecting what our children are exposed to. That decision should be ours and not the schools, or the municipality.

If the goal was to teach kids acceptance and love of those that are different, there are many other ways to do so that don’t include exposing underage kids to homosexual lifestyle and normalizing it via hidden agendas.

Pastor Ariel went as far as going to a local newspaper with this issue, and filing a petition with the city hall to remove the LGBT community’s school program illegally backed by Eilat’s municipality.

It should be a battle in itself, as we are aware how strong the LGBT propaganda is, and those who do know align with it are targeted as “hateful enemies”.

Please pray for this situation, for the children not to be exposed to this at local Eilat schools, as well as for Pastor Ariel and Mayan Eilat Congregation that had the boldness to stand up against sin and wrongdoing while protecting children.